Debut novelist Jade Chang, author of The Wangs vs. the World, talks with co-host Nicole Nelson about playing with point of view, her experience putting an earlier novel in a drawer, and how she found her agent.

In the second half, novelist Janice Y. K. Lee, author of The Expatriates, talks about balancing three different POV characters, not taking the easy way out, and the importance of trusting yourself and your voice when you struggle to write through to the end. 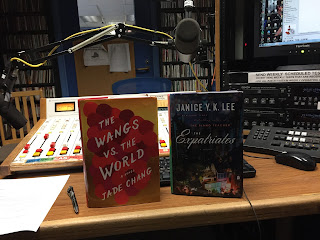 Posted by Nicole Nelson at 9:56 AM No comments:

Poet and non-fiction author Patrick Phillips joins co-host Marrie Stone to talk about his book, Blood at the Root: A Racial Cleansing in America.  Phillips shares his experiences in hometown Forsyth County, Georgia, a township that remained essentially 100 percent white throughout most of the 20th century. He also talks about the responsibility of white writers to talk about race, his research process, the factors that existed in Forsyth that made this possible, and the complicated characters that emerged from history to bring this shadowy story to light.

In the second half, novelist Whitney Terrell discusses his latest novel, The Good Lieutenant.  As an embedded reporter in Iraq, Terrell tells the story of one female lieutenant and the forces and decisions that shaped the woman she became.  He tackles several points of view, a complicated structure, and shares his experiences of how it all happened.

Martin J. Smith and Aris Janigian talk with Barbara DeMarco-Barrett about the art, craft, and business of writing

Martin J. Smith, author of Combustion, and Aris Janigian, author of Waiting for Lipchitz at Chateau Marmont talk with Barbara about plotting (or not), creating suspense, publishing with a small press, and more.

Novelists Ann Hood and Margot Livesey join Marrie Stone to talk about their latest novels, The Book That Matters Most and Mercury.

Ann Hood talks about book clubs, the books that have mattered most to her at various points in her life, and her mother and daughter coming-of-age story.  She shares what she's learned over the years, the progress women have made over the past decades, and lots of wonderful writing advice.

Margot Livesey joins in the second half to talk about tackling a different and more complex kind of infidelity in marriage, how an article on gun control sparked this novel, what concerns have haunted and intrigued her over the years, and much more.  (Please note the last few moments of our interview were lost, so it ends a bit abruptly, but you can find out more about Margot and her book tour at her website, www.margotlivesey.com).

Debut novelist Swan Huntley, author of We Could Be Beautiful talks with co-host Nicole Nelson about how writing in the first person allows her to explore the space between what a character is telling us and what we know to be true, how she came to the realization that her original ending wasn't right for the story, and how she discovered her process as an outliner.

In the second half, novelist Affinity Konar, author of Mischling, talks about how her story grew from hearing dialogue in her head between twins, about going "sound-first" into words, and thus being drawn to the word "Mischling" in spite of its ugly meaning and history, and her writing advice to honor your obsessions.

Download audio.
[Note: Swan Huntley's reading selection was cut down due to audio issues; therefore, her reading starts in the middle of her first chapter, not the beginning.] 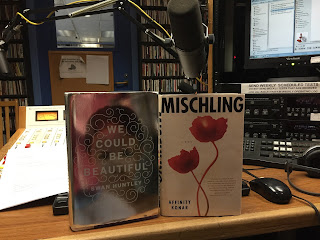 Posted by Nicole Nelson at 10:32 PM No comments: